News
Low Flying Over Mudjimba
9 September, 2020 by MRA in News 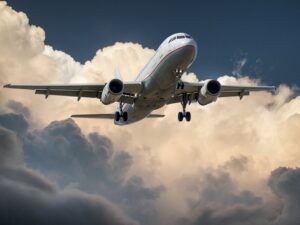 Since the opening of the new Sunshine Coast Airport (SCA) runway on 14 June 2020 the Mudjimba community has been expressing their concerns regarding the impact that flying into and out of the new runway has on their welfare. There appear to be two key areas of concern

The Mudjimba Residents Association (MRA) have investigated these complaints by studying flight histories at the SCA recorded on the Airservices Australia (ASA) WebTrak site.

The analysis indicated that when the wind was predominantly from the north:

When the wind was predominantly from the north:

This analysis vindicates the concerns of residents who feel harassed by low flying aircraft over their homes. These practices are both disturbing and potentially dangerous.

The risk of fixed wing aircraft overflying Mudjimba could be eliminated by simply directing aircraft on take-off to the south, to pass over the coastline before changing direction, or, when coming into land, to line up on the flightpath before crossing the coast.

There are also alternative routes available for helicopters to access their parking areas at the airport (over cane fields to the north and west, and over the golf course and conservation areas to the south and east), which would avoid overflying Mudjimba.

Consequently, all flights at SCA, both fixed wing and helicopter, could avoid flying low over the residential area of Mudjimba by The Airport and ASA simply directing the flights to avoid those locations.

The Mudjimba Residents Association has discussed these options with the Sunshine Coast Airport and we will continue to seek improvements in the control of flights into and out of the airport that respect the welfare of their neighboring community.

The concerns expressed by the community have been heard, but we need to keep expressing those concerns if we are going to see change in flying practices.