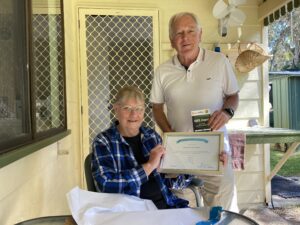 At the recent Annual General Meeting of the Association, the President, Martin Peelgrane, spoke of Jackie’s tireless work since taking over as Hall Manager in March 2007.  According to the records, she has been a financial member since 1995.  Jackie and Warren are largely responsible for the trees and gardens around the hall.

Robyn Harm advised that had Jackie not stepped in around Christmas 2006, the hall would have folded.

Helen Leckie asked that her appreciation of Jackie, and her continued involvement in the Association, the hall and the environment in Mudjimba be recorded.

The presentation of a Certificate of Appreciation and a gift card to assist in the operation of Jackie’s Safe House for Wildlife was recently made.