The meeting of the North Shore area (the first of 5 area meetings along the coast) was very well attended and they turned away dozens who could not fit into the small meeting room at Coolum Surf Club. Council totally misjudged the community interest in the subject. We were introduced to the independent chair of MRECG, Prof Peter Martin (who seemed a reasonable choice). There was no political representative in attendance, but Cr Robinson had offered his apologies.

The meeting was run by the Council project manager, with several staffers and a consultant to assist.

Information handouts from Council and SCEC. 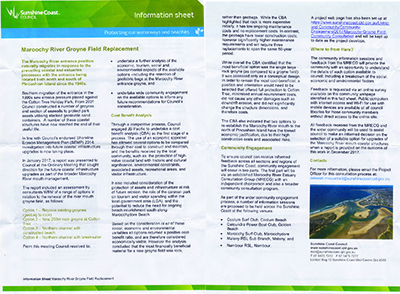 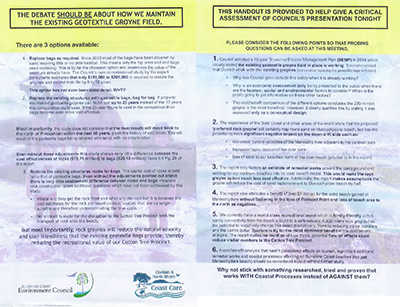 The meeting was essentially a presentation of the Cost Benefit Analysis (CBA) they had undertaken to come up with their recommendation to Council of a rock groyne. A meeting of Council had deferred the recommendation and asked for this MRECG process to report back to Council in December 2017.

The Maroochy River Groyne Field Replacement (MRGFR) Team had considered 4 options for the CBA.  I was professionally embarrassed for the MRGFR Team whose CBA was superficial and poorly composed. They made no real attempt to quantify the intangibles (amenity and environment) and made no attempt to sensitivity test their assumptions. Frankly, a very disappointing CBA.

The meeting attendees were very concerned with amenity and the environment (rather than the engineering approach of the pure cost of protecting the value of the caravan park against the threat of erosion).

The attendees clearly had a preference for retaining the existing treatment of sand filled geofabric bags in the location of the existing 4 groynes, over the MRGFR Teams “rock groyne field” in the same location as the existing 4 groynes. The Team appears to have dismissed the more radical options of a 200m + long rock groyne from Cotton Tree on the southern side of the river mouth, and two options to “retrain” the river mouth to the north side of Pincushion Island.

At MRA these last three options are the greatest threat to MRA’s interests (our beach) and we just have to make sure these 3 options don’t gain favor in the next 4 meetings. It may be worth an MRA delegate attending the meeting at Maroochydore Surf Club to make sure the Team does not stray from this dismissal.